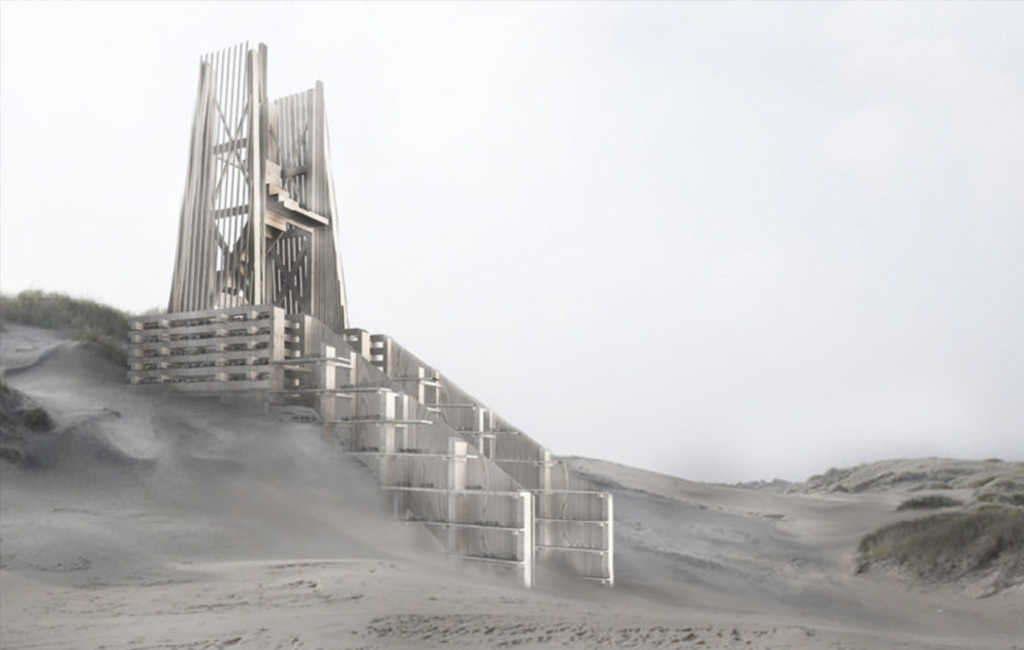 Inside a fading territory

The topic of this thesis is”choose nature as hub”,this is chose based on the variability of the nature on the site. The humanistic narrative of fading is derived from natural transformation.

The proposition of this thesis is thoroughly base on constantly changing context in grenen, skagen.Based in skagen odde, the northernmost part of north jutland, is considered to be one of the largest spits in europe. The peninsula completely created by a continuous process of marine sand and gravel accumulation, moved in a north-east direction each year,the coast on the west side is being eroded, here, skagen odde is on the extreme unstable terrain, is changing all day, every day.

There will be two parallel traces. Firstly,it aims to supply the most basic elements of architecture, which is to create a fully immersive experience of surrounding changing nature. The sealed glass and insulation materials are not required in the buildings, the wind and light will penetrate to building, rather than most of comfortable nature museum. The second is to investigate the theory and practices of “moving natural material”— changing natural elements and specific natural phenomenon on the site,making these intangible moving materials visible through an architectural method. In grenen, the different situation is that we could not accurately estimate time to let the nature to demolish the building, it is not possible to determine when is the best time to manually interfere with the cleaning up process. In this case, the materials of building are naturally grown and produced from the landscape—local marine stone, pebble, wood. The natural building doesn’t have to be taken down, it will decompose and fade by itself and end up in the changing nature without leaving traces—still stone and wood.

The focus will be on two sites at the northernmost point of Skagen Odde, Grenen. Along an existing 3 kilometers tourist route, that offers tourists a sampling of Grenen’s wonderful nature —unique vegetation, animals, celebrated special light and landscape, two sites linearly formulate from northeast dry inland to the coastline and offer different type of nature.

Mapping I | Changing and Fading Timeline of Human Structures

Mapping I unfolds the historical transition of human structures in Grenen. Here, all landmark buildings had changed by a variety of reasons, which is mostly environment. All these buildings had been abandoned, migrated or buried, after that they were rebuilt, transformed, or thoroughly entombed with the rhythm of sandy geological change during the past hundred years.

Mapping II represents a geological changing evolution and sediementological section.The coast on the west side is being eroded, and as such tip as a whole is slowly growing 6-8 meters in an north-easterly direction by new deposited marine sand and aeolian deposit each year.

Mapping IV unfolds the main wind and current direction in Grenen. Address on the tip of Grenen, It could ascertained that the main wind direction streamed from northeast and east.

With focus on the full view of surrounding changing nature and the experience of the strong wind on site I, a upright tower and the view of the top represent a more intense and panoramic experience.The wind Observatory is highly situated, alone on the peak of 6-meters beautiful white Dune with strong wind in the middle of dune-heath field.

The Observatory offers a whole up-process lead from base dune to the 10-meters view deck with the increase of wind speed. This gives a gradually increasing feeling of the wind, as well as the intense experience of the strongest wind, dazzling light and panorama on the terrace. Firstly, this tower offers a intense experience of the wind, two open sides are towards main wind direction, it define a big wind tunnel with other two closed facades. People could feel strong flow when they pass through the tunnel in building. And the wind speed is increased by the lift of height. People could feel the increasing process of wind speed with going up the staircase of tower. On the other hand, in the landscape where the northeast and east wind and Aeolian sand coutinuously impact, this inland tower gradually accumulate sand until it collapse in sand, this fading process with wind-sand will reflect visualize by the architectural components.

What I want to convey here is that the wind controls the power sources of the moving materials. Address on the front of Grenen, I ascertained that the main wind direction streamed from northeast and east, and that decipher why the sandy drifting all direct to southwest and west. Therefore, this kind of flowing trace can only be simulated on the façade which face to main wind directions, all moving materials will just accumulate on the windward side of building.

On the other hand, the wind speed is increased by the lift of altitude. Basically, the low-lying terrain always feels smaller wind, on the top of dune suffers stronger wind. However, the sand sediment is opposite, fluent sand deposit more stuff in low-lying terrain with smaller wind, leaving clearer sand drifting patterns. I would like to present the part of surface materials is pebble, these pebbles are the architectural component or Sambuichi called “the inert materials”. The sand sediments represent decreasingly by the vertical distribution of pebbles from building’s bottom to the top, the pebbles, sand sediments, all working together to reflect the wind.

Mapping V calculates the full moon rise angle in 12 months and its precise active orbit in every full moon day. On the tip of Grenen, the angle of fullmoon-rise is from 56oNE in January to 133o SE in the whole year. On the other hand,Lunar orbit is not still, or a moment. After the moon finishes its first appearance and lifts form sea level, it starts moving from north-east to east to southeast,the lunar will pass several important coordinate position—90o E, 112.5o ESE, 135o SE, 157.5o SSE from its raising to midnight.

The purpose with the basic bath house on the waterfront is to create an unprecedented and reliable area for swimming in dangerous Kattegat. It sets to investigate a deeper and special experience of atmosphere and changing nature than the way before — pass by the coastline.The part of bathing place will be used for basic semi-enclosed changing room and shower. Futhermore, it is space where people accelerate in-depth dialogue to natural phenomenon with their further step into the seawater, perceiving some more peculiar natural phenomenon in Grenen — the specific blue light and the lunar. The whole building also include toilet, a small sauna room, a kiosk and a realizable safe swimming area.Here,people could have a night bath in bright midnight lunar and blue hour when Skagerrak is still warm enough. At this time, everything is in a fantastic blue background.I would like to focus on the moving materials—Lunar, water and blue Light.

Firstly, the building will be arranged with the decline of coast dune. With the process of stepping into water from the top of 5 meter dune, the visual proportion between two blues changes all the time, people could see a dynamic horizon.

Move to another moving material moon,the full moon will be used as analysis object here. In this area I found that the angle of fullmoon-rise is from 56o NE in January to 133o SE in one year. Therefore, twelve “Moon Mark” (wooden piles) will be placed in the water, according with the coordinates position of monthly full moon rise. I want to remind spectators to take the chance of monthly greatest moment.

Lunar orbit is not still, or a moment. After the moon have done its first appearance and lift form sea level, it start moving overhead.Scottish engineer Alexander Thom finished his book Megalithic Lunar observatories after he amassed a great deal of hard evidence for Stonehenge in England, his research has shown that these megaliths suggest the lunar orbit and the marks of moon rise and set. Taking inspiration from Thom’s studies, I go into the complete full moon path and calendar from moonrise time to midnight in monthly full moon day, in this area, the moon always move from north-east to east to southeast. Finally, I make four of “Moon Mark” which work like the Rocks in Stonehenge—to occupy on important coordinate position—90o E, 112.5o ESE, 135o SE, 157.5o SSE. The four piles remind human being of the current location of moving moon, people will wait for it to move to the next point.

Previous: INDOOR
Next: THE FISHING COMMUNITY