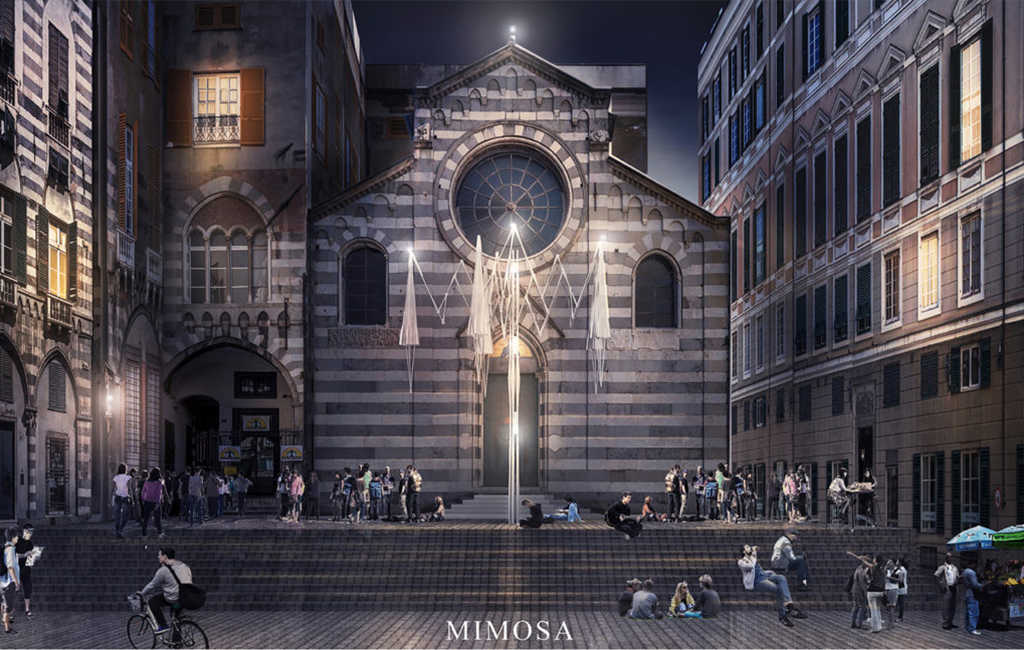 “City sensor” is a conceptual project, a parametric example of Parametric Mimosa algorithm applied to architectural design, which is designed for Genoa’s various population groups through artificial design logic and computer-aided calculation.

In Italy, the most iconic renewal experience in recent years, both strategically and collectively, has come from Genoa. In general, in the case of Genoa, all the interests were operational. In other words, its management capacity is to combine many different sources of funding, with ordinary or special planning projects and tools, to form an effective renewal process in the waterfront area and in the old town centre.

▼ The waterfront and old town center of Genoa

▼ Genoa is a big city

As the case of Genoa’s historic inner city renewal highlights, the core measure of historic urban planning today is a complex integration of comprehensive urban policies. This policy is not subordinate to one urban planning or integrated urban policy, but relies on the intersection of multiple measures and different types of means (general, exclusive, ordinary, special), and is coordinated with the functional “mix” originally brought about by various contexts and their characteristics. This affects not only regional characteristics (built environmental Spaces and, more importantly, open Spaces), as well as operational patterns or presentation profiles, but also the existing practice of different population groups constituting their possible forms of “co-existence”, resulting in effective livable urban areas.

After some thinking, we want to generate a mobile device based on the environment, and finally transform a sincere space according to the data collected from the environment feedback.

In order to have a deeper understanding of the site, we conducted field research, went to the land to feel life, and obtained first-hand environmental data. Finally, it concludes that the site has the following characteristics:

1. It’s windy and cold. Night light is not enough, slightly dark;
2. Uneven exposure in summer;
3. Very small squares;
4. There was a grey and white church facing us;
5. There’s a coffee shop, a bar, but no place to sit;
6. This is an agreed place. What time do you see this space at the church door?
7. As the historical gathering point of Genoa, the teacher brings the children to read history, as if there is no room in the shed scale.

Sitting on the cold steps of Genoa with a bunch of sensors, we decided to make a retractable umbrella, open when needed and close when not needed, and add a roof to the historic exhibition space.

Put several umbrellas together to form a Shletter. Now it’s the house, now it’s the umbrella shading and a little bit of privacy, or a transformation of public space. Well, it’s not an umbrella, a giant machine, sensing the city. Using the environment to generate such a big monster can move, the data collected from the environment feedback data finally converted into the use of space.

From chaos to the implementation of ideas in physical space, has experienced many times of deliberation. This is not so much an architectural design as a research process of breaking boundaries. For the first time, I had a systematic understanding of what is computer-aided, what is the design category of Human, and where are the boundaries. Can we break the boundary? It also gives us a lot of routes and ideas for getting real data.

For a few days, I have been thinking about the question of the professor, the data is like a conversion medium, the perception of the body, the perception of color, these dimensional criteria that I can collect on my own, even humidity comfort, noise level, feel cold, all these things can be quantified. You can define it yourself. Throw away the big data data analysis related books, from the tutorial. We began to record the perception of people, the perception of city citizens, and translate it into visual results.

The process of technical implementation requires reading quite a few papers. At the same time, the software also needs to be self-taught, such as how we get the location map of the people in the square and what people are most willing to do. There is a dimension of temperature narrative, which is of real value to our design.

With the behavioral data of perceptual nature, it is necessary to use the structure to support the mapping of urban perception to design. What space is needed where. Organize your chaotic knowledge into walls, into structures, into specific locations. Here we simulate the position of the umbrella, the size of the umbrella, umbrella size. The next step is to delve deeper — what is an umbrella? How to construct the umbrella structure?

On the scale relationship between the umbrella and the church. The deconstruction of the umbrella corresponds to the scale of the church, so sometimes you see it in a particular form that looks like the door of a church. It was an Epiphany of the time, and a domain homage to the church.

In the end, the designers boldly pushed the boundaries of computer-aided and Human design to create a giant machine, the MOIMOSA city sensor.

Previous: Parametric Architecture Design in Milan
Next: From Intention to Graphic Language